Jason Isaac Cutler, aka Jay, is an American IFBB professional bodybuilder. He is also a 4-time Mr. Olympia winner (2006, 2007, 2009, and 2010). This bodybuilder has appeared on many fitness magazine covers such as Flex, Muscle and Fitness, Muscular Development, etc.

Jay knows the value of destitution and hard work. With his dedication, subsequently, he has become the grass root of the bodybuilding elite. Modest, approachable, and straightforward, Jay is the kind of person bodybuilders idolize and look up to. Also, he is true to his form. While he doesn’t have the most epic workout tales to share, his training rituals have mythical originality.

He has more than earned his spot in the industry and hall of fame. Since 2000, he has been the most recognizable name on the professional circuit. After winning multiple titles in recent years, he inspires millions of people to make a long and illustrious career out of their physique.

Jay Cutler was born on 3rd august 1973. His birthplace is Sterling, Worcester, Massachusetts, United States of America. Currently, he is 46 years old.

Let’s take a look at his personal life a little closer: 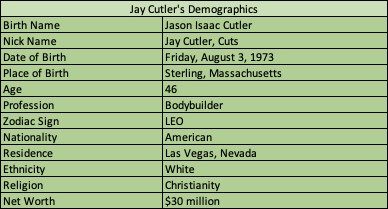 Jay cutler’s family whereabouts are unknown, but he has six siblings. As far as his education is concerned, he attended Wachusett Regional High School in his teens. Later he graduated from Quinsigamond Community College in 1993 with a degree in Criminal Justice. His wife’s name is Kerry Cutler.

Jay Cutler was born and raised in Massachusetts, United States of America. He grew up in a huge family as he was the youngest of seven siblings. During the early years of his life, Jay started working with his brother in a construction company. Though he was only 11 years old at that time, he was naturally developing a beefy physique.

He spent most of his youth lugging concrete blocks from one place to another. When he was 18 years old, he started going to the gym to lift weights. However, even at this point, he had no idea he would choose bodybuilding as a career. Time kept passing, and he entered college to get a degree in criminal justice. At that time, he was focusing on becoming a corrections officer for a security prison.

While he was in college, he fell in love with his gym and workout sessions. He got so much into weight lifting that he started training almost every day after his classes. With time, he made some serious progress to his form. Soon, people around him started noticing him for his distinctive and robust physique.

After receiving massive encouragement from his trainer, he entered his first-ever bodybuilding competition at 20. He took part in the 1993 NPC Iron Bodies Invitational Show. Unexpectedly, he walked away from the competition after winning two titles. He won both teenage and men’s heavyweight divisions.

After winning this competition, he saw his potential to thrive within the industry. Later, he decided to pursue a full-fledged career in fitness and bodybuilding.

After prevailing in his first bodybuilding competition, Jay Cutler did not waste a single moment before entering such tournaments. With his commitment to fitness and bodybuilding, he soon won two competitions simultaneously. He won the 1993 NPC Teen Nationals and 1995 NPC US Tournament Of Champion Shows.

By this time, Jay Cutler, bodybuilder 2020, gained fame and publicity for his outstanding performance at such a tender age. A lot of people started considering him as the most promising bodybuilder of the era and the future. After receiving his graduate degree from college, he instantly knew he wanted to pursue his passion. He then decided to leave his ambition of becoming a corrections officer.

In the next few years, Jay Cutler kept training rigorously in his gym to sculpt his dream form and physique. It was his ultimate goal to become the biggest and most prominent bodybuilder in the world. During 1996, he came back for more tournaments. He returned to the podium with an excellent package for his biggest show to date.

Life as a Professional Bodybuilder

Over the next ten years, Jay Cutler went on entering a massive total of 23 competitions. He won 11 of them and was placed among the top 3 in the rest of the tournaments. During this time, he became one of the most famous and greatest bodybuilders in the world.

However, it was not until 2006 when Jay Cutler surely touched his career’s peak at 33.

Between 2006 to 2010, he had to face extreme rivalry against some of the industry’s best opponents. He had to fight against Phil Heath and Ronnie Coleman in some of the most epic competitions in bodybuilding sport, i.e., Mr. Olympia. Luckily, he won every contest except for in 2008, taking four trophies home in total. 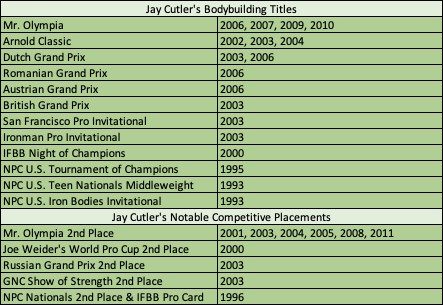 Jay Cutler kept taking part in different competitions for the next three years. But, he stepped on the stage as a competitor for one last time during the 2013 Mr. Olympia tournament. Though he didn’t win, he still did pretty great to reinforce his spot among the legends.

After this competition, he bid farewell to the bodybuilding sport for good as an icon.

While he was taking part in different competitions, he trained twice a day, 5 days a week. He would always go to the gym for his workout sessions to develop and maintain his physique.

According to Jay Cutler Mr. Olympia, he is a competitive bodybuilder. He trains twice a day, and that’s fun and business for him. If it’s not working or training, you won’t find him doing anything else out of the ordinary.

There is no denying that Jay Cutler has given his entire adulthood to bodybuilding. He has worked day and night to succeed as an entrepreneur, a professional competitor, and a protagonist for the sport. He has surely built a long-lasting legacy on the daily struggle, detriment, commitment, and hard work.

To become a competitive bodybuilder, Jay Cutler had to eat a lot to gain ample nutrients and calories. He would back up his hard and regular workout sessions and training programs with multiple meals throughout the day. He ate food constantly, due to which his routine calorie intake was up to 4700 calories.

His normal diet regime consisted of 40% protein, 40% carbohydrates, and 20% fat. Jay Cutler’s diet is based on these principles:

-Nutrition is very crucial, even if you train in the gym. Take the right amount of proteins, healthy fats, and carbs to increase your lean body mass.

-Try to add more supplements to your diet. Multivitamins, protein powders, BCAAs, and fat burners are a must to achieve prompt fitness goals.

-Building muscles require adequate calories. So, schedule your time to consume meals before doing anything else. Also, maintain the right amount of macronutrients without expecting your carb-rich foods to do the trick.

Jay Cutler’s ripped body was not built in a day. It took him more than two decades to get where he was with heavy lifting and strenuous training sessions. He trained with consistency, altitude, and intensity. There were no restrictions on Jay Cutler’s workout philosophy. He focused more on the muscle groups that are not full or dense. He trained his arms lightly, but for his back and legs, the training sessions were very, very hard. 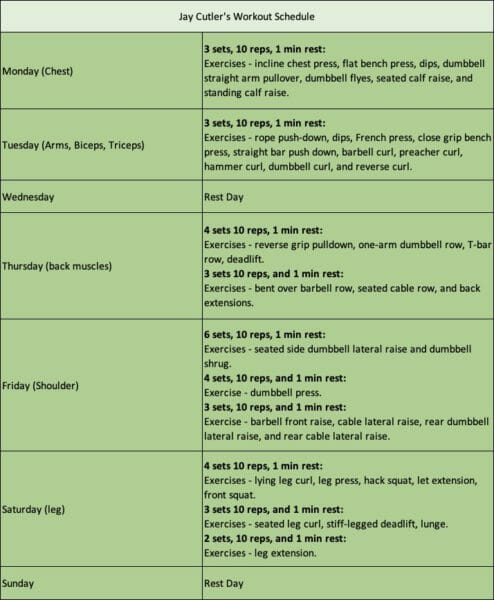 Here are some of his fundamental rules for enhancing physical potential while keeping your saneness intact.

1. Use What Works For You

You will never find Mr. Olympia using gimmicky equipment and exotic exercises. He is more into rows, squats, bench-presses, pullovers, and preacher curls. Why? Because they are effective for him.

2. Add More Sets And Not Reps

According to orthodox theories, larger body parts need 12-16 sets of workout sessions to grow effectively. But, Jay Cutler didn’t rely on it at all. He performed 3-4 times the number of set allocated for a particular body part without experiencing failure.

He didn’t perform these sets out of amazement; it was a part of his normal routine. Other bodybuilders liked to do reps and cut down on the sets. Jay liked to go heavy for individual reps while adding more sets to his routine. Jay Cutler’s rule contributed significantly to the solid muscularity he was famous for.

For beginners, great results do come true with full-body routines. However, for professionals and advanced lifters, there is no alternative for a well-made split. Regular lifters know that the easiest way to a plateau is to find a perfect workout, do it and go to the gym to do it all over again.

Jay also insisted on getting ample rest among the sessions for each body part. But, also claimed that it could be different for different people. What didn’t vary for him was the utmost significance of horizontal rest.

4. Double Up Where Necessary

Jay Cutler was never shy about doing the same workouts over and over again. He gave importance to just one body part when needed. Jay excellently committed two two-times per week to double up sessions. He did it with a new key focus every time. This rule helped him make a three-dimensional set of exercises with show-stopping improvement.

Jay thinks that the relevant information about bodybuilding is increasing exponentially. There is too much material for you to read and apply to yourself. One might think that the top-notch competitor Jay Cutler was always looking for different tricks to enhance his performance. However, on the contrary, his basic guide was truly subjective, i.e., his approach and feel.

Jay Cutler trained when he felt his body was ready to train. He thinks that things work out differently for different people at different times. What works for you today might not work tomorrow, so trust your gut and go with the flow.

Jay feels that it is always important to have a plan in perspective. He says that one must never be consumed with a routine that has no room for improvisation. For some, it might be a recipe for disaster, but they don’t have an extraordinary level of commitment like Jay Cutler. This bodybuilding approach helps him keep things interesting in the gym and keep him coming back for years.

Jay officially retired from bodybuilding in 2013. He had suffered a serious bicep injury in 2011 that significantly dulled his ability to compete professionally. After his retirement, Jay Cutler is now achieving tremendous success in multiple ventures.

He has recently launched his fashion brand called Cutler Athletics. With his website, he sells various garments to people who wish to achieve their fitness goals in real-time. Even his company has gained massive fame on social media and among his followers in recent years. You will also find many online courses to learn about Jay Cutler’s success secrets established over time.

What to Learn from Jay Cutler

As the ultimate champion of bodybuilding, Jay Cutler has taught us to set aims for ourselves and work hard until the accomplishment. He committed to this port right after graduation and became a legendary name in the world. It teaches us never to give up on our passion and come back stringer even after failure.

Information contained on this page is provided by an independent third-party content provider. Frankly and this Site make no warranties or representations in connection therewith. If you are affiliated with this page and would like it removed please contact [email protected]