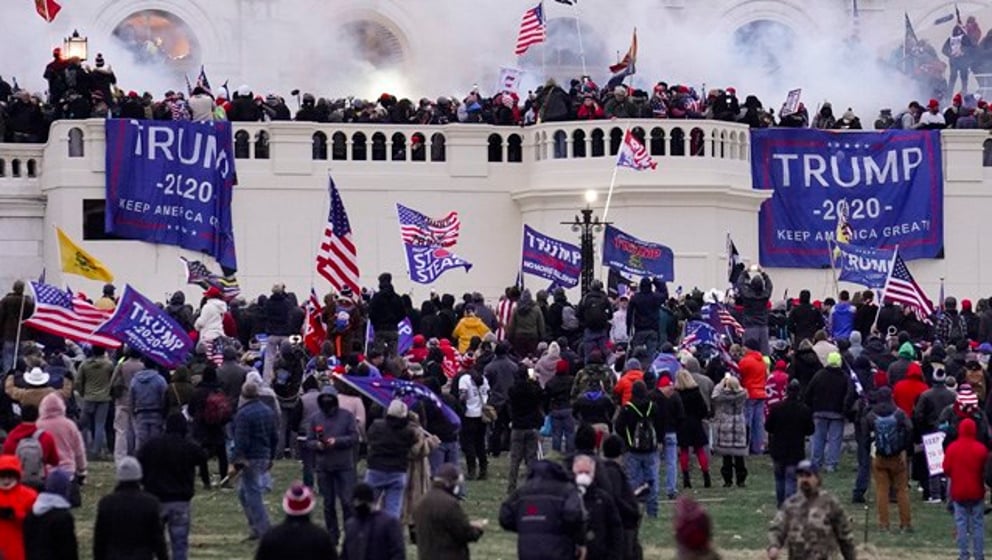 Federal prosecutors are recommending an eight-year prison sentence for an off-duty Virginia police officer who was convicted by a jury of storming the U.S. Capitol to obstruct Congress from certifying President Joe Biden’s 2020 electoral victory.

Former Rocky Mount Police Sgt. Thomas Robertson used his law enforcement training to block police officers who were trying to protect the Capitol from a mob’s attack on Jan. 6, 2021, prosecutors said in a court filing Thursday supporting their sentencing recommendation.

“Instead of using his training and power to promote the public good, he attempted to overthrow the government,” they wrote.

An eight-year prison sentence would be the longest among hundreds of Capitol riot cases. The lengthiest so far is seven years and three months for Guy Reffitt, a Texas man who attacked the Capitol while armed with a holstered handgun.

Robertson didn’t testify at his trial before a jury convicted him in April of all six counts in his indictment, including charges that he interfered with police officers at the Capitol and that he entered a restricted area with a dangerous weapon, a large wooden stick.

Robertson’s lawyers said the U.S. Army veteran was using the stick to help him walk because he has a limp from getting shot in the right thigh while working as a private contractor for the U.S. Defense Department in Afghanistan in 2011.

In their sentencing memo, prosecutors accused Robertson of lying about his military service. Robertson identified himself on his resume as a U.S. Army Ranger school graduate, but his official military records don’t support that claim, prosecutors said. They said Robertson also lied to a reporter about receiving a Purple Heart.

Robertson’s jury trial was the second for a Capitol riot case. Reffitt’s was the first. Jurors have unanimously convicted seven riot defendants of all charges in their respective indictments.

Robertson traveled to Washington, D.C., on the morning of Jan. 6 with co-worker Jacob Fracker and a third man, a neighbor. Fracker also was an off-duty Rocky Mount police officer. He was scheduled to be tried alongside Robertson before he pleaded guilty to a conspiracy charge and agreed to cooperate with authorities.

Fracker testified at Robertson’s trial that he initially believed that he was merely trespassing when he entered the Capitol building. But he ultimately pleaded guilty to conspiring with Robertson to obstruct Congress.

Robertson’s lawyers conceded that he broke the law when he entered the Capitol during the riot. They encouraged jurors to convict Robertson of misdemeanor offenses but acquit him of felony charges.

Jurors saw some of Robertson’s posts on social media before and after the Capitol riot. In a Facebook post on Nov. 7, 2020, Robertson said “being disenfranchised by fraud is my hard line.”

“I’ve spent most of my adult life fighting a counter insurgency. (I’m) about to become part of one, and a very effective one,” he wrote.

In a letter addressed to the judge, Robertson said he takes full responsibility for his actions on Jan. 6 and “any poor decisions I made.” He blamed the vitriolic content of his social media posts on a mix of stress, alcohol abuse and “submersion in deep ‘rabbit holes’ of election conspiracy theory.”

“I sat around at night drinking too much and reacting to articles and sites given to me by Facebook” algorithms, he wrote.

The town fired Robertson and Fracker after the riot. Rocky Mount is about 25 miles (40 kilometers) south of Roanoke and has roughly 5,000 residents.

Robertson has been jailed since Cooper ruled last year that he violated the terms of his pretrial release by possessing firearms.

Roughly 850 people have been charged with federal crimes for their conduct on Jan. 6. Over 350 of them have pleaded guilty, mostly to misdemeanor offenses, and over 220 have been sentenced so far.