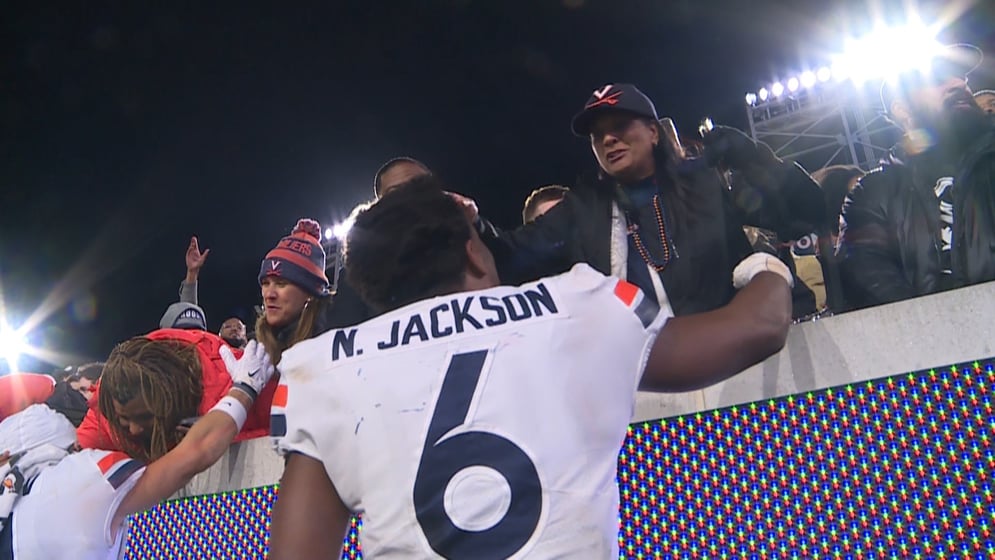 ATLANTA, Ga. (CBS19 SPORTS) -- Tony Elliott had an uneasy feeling about Nick Jackson's health during the bye week, but as the senior linebacker progressed, Elliott knew there was no way he could hold back the Atlanta native returning to his hometown.

"Man, Nick he's the heart and soul right now of this football team," Elliott said on Thursday night, "It means so much to him that he was not going to be, we would have had to take his helmet in order for him not to play."

Although banged up and playing limited snaps due to a knee injury suffered against Louisville, Nick Jackson registered a team-leading eight tackles and his first career fumble recovery and multi-sack game with two, including a crucial one late in the fourth quarter.

When asked what percentage of health Jackson felt entering the game, he said he felt "good enough to play". Jackson played his first ever game in his hometown of Atlanta in front of family and friends where he scrounged together 33 tickets for, along with fellow Lovett School product Stevie Bracey fitting a few mutual guests in.

"Yeah it was a big time that I was back home, but at the end of the day it was a bigger deal to play with my brothers," Jackson said, "Shoot you only have so many opportunities to come out and play. You're only guaranteed 12 a year, so I wasn't going to miss one, I've already missed enough with the targeting call. Shoot, I was going to push through anything."

The grind it out effort from Jackson was emblematic of the Cavaliers performance in the 16-9 win over Georgia Tech, the program's first win at Bobby Dodd Stadium since 2008. The Virginia defense accounted for eight sacks on the game, which was the most since 2006 and one shy of the school record. Former Yellow Jacket Chico Bennett Jr. also played a key role, racking up two sacks for his second multi-sack game of his career, along with seven tackles.

"It's a faceless opponent, but obviously it did mean a little more to me, especially for Nick," Bennett Jr. said, "But overall I think we just came together as a whole unit, especially as a team more so to say just we all put the pieces together."

Things were touch and go for Bennett Jr. during the game as well when the defensive end came up hobbled.

"I told him before the game, I said 'Man I know you're excited, but hey stay locked in and just go play a heck of a game, don't get caught up in all the hoopla, just go play a game," Elliott said, "It was a little scary there, when he went down it was a little scary for a second, but he popped right up and he was kind of fighting the trainers to get off the ground, that's how much he wanted to be successful and play in this game and finish."

"Man, I'm not going to lie I was a little dazed afterwards," Bennett Jr. said, "But shoot afterwards I was like coach says you got to sacrifice your body, put your life on the line tonight."

On the night, the Virginia defense came up time and time again in the second half not allowing Georgia Tech to score in the second half or even pick up a first down in the third quarter. The Cavaliers were urged on by their two gritty defenders in Jackson and Bennett Jr., who made sure to make their trip back to Atlanta special.

"They led the team alright, those guys played their tail off tonight," senior quarterback Brennan Armstrong said, "Defense literally kept us in the game bottom line. I'm happy for those guys, to come back to your hometown, shoot I wish we could all go back to Shelby, Ohio, you guys wouldn't like it, but it's cool when you get to go back to your hometown I completely understand. There's just something else about the game."