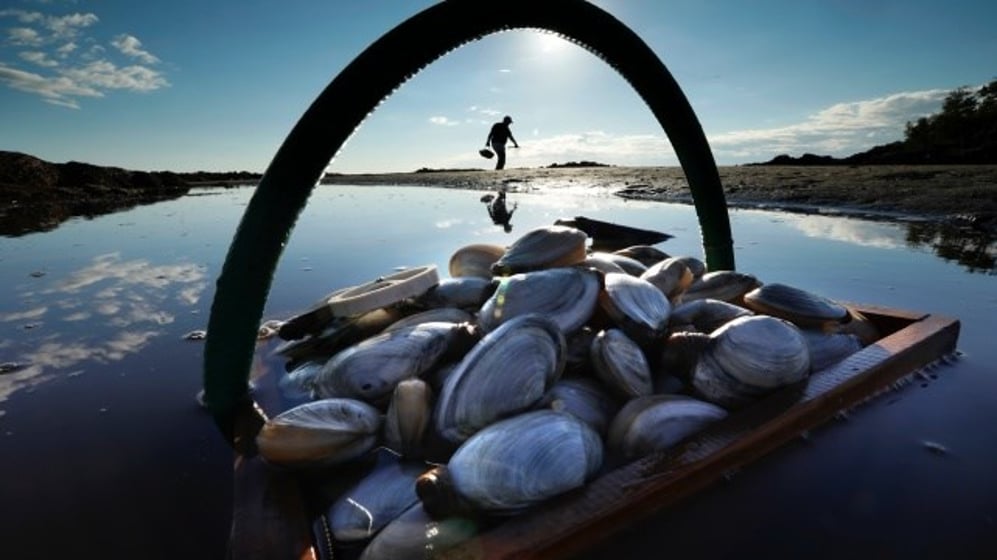 In this Sept. 2, 2016, file photo, a basket of clams is harvested at Cape Porpoise in Kennebunkport, Maine. (AP Photo/Robert F. Bukaty, File)

PORTLAND, Maine (AP) -- Fishing regulators and the seafood industry are grappling with the possibility that some once-profitable species that have declined with climate change might not come back.

Several marketable species harvested by U.S. fishermen are the subject of quota cuts, seasonal closures and other restrictions as populations have fallen and waters have warmed. In some instances, such as the groundfishing industry for species like flounder in the Northeast, the changing environment has made it harder for fish to recover from years of overfishing that already taxed the population.

Officials in Alaska have canceled the fall Bristol Bay red king crab harvest and winter snow crab harvest, dealing a blow to the Bering Sea crab industry that is sometimes worth more than $200 million a year, as populations have declined in the face of warming waters. The Atlantic cod fishery, once the lifeblood industry of New England, is now essentially shuttered. But even with depleted populations imperiled by climate change, it's rare for regulators to completely shut down a fishery, as they're considering doing for New England shrimp.

The Northern shrimp, once a seafood delicacy, has been subject to a fishing moratorium since 2014. Scientists believe warming waters are wiping out their populations and they won't be coming back. So the regulatory Atlantic States Marine Fisheries Commission is now considering making that moratorium permanent, essentially ending the centuries-old harvest of the shrimp.

It's a stark siren for several species caught by U.S. fishermen that regulators say are on the brink. Others include softshell clams, winter flounder, Alaskan snow crabs and Chinook salmon.

Exactly how many fisheries are threatened principally by warming waters is difficult to say, but additional cutbacks and closures are likely in the future as climate change intensifies, said Malin Pinsky, director of the graduate program in ecology and evolution at Rutgers University.

"This pattern of climate change and how it ripples throughout communities and coastal economies is something we need to get used to," Pinsky said. "Many years are pushing us outside of what we have experienced historically, and we are going to continue to observe these further novel conditions as years go by."

While it's unclear whether climate change has ever been the dominant factor in permanently shutting down a U.S. fishery, global warming is a key reason several once-robust fisheries are in increasingly poor shape and subject to more aggressive regulation in recent years. Warming temperatures introduce new predators, cause species to shift their center of population northward, or make it harder for them to grow to maturity, scientists said.

In the case of the Northern shrimp, scientists and regulators said at a meeting in August that the population has not rebounded after nearly a decade of no commercial fishing. Regulators will revisit the possibility of a permanent moratorium this winter, said Dustin Colson Leaning, a fishery management plan coordinator with the Atlantic States commission. Another approach could be for the commission to relinquish control of the fishery, he said.

The shrimp prefer cold temperatures, yet the Gulf of Maine is warming faster than most of the world's oceans. Scientists say warming waters have also moved new predators into the gulf.

But in Maine, where the cold-water shrimp fishery is based, fishermen have tried to make the case that abundance of the shrimp is cyclical and any move to shutter the fishery for good is premature.

Another jeopardized species is winter flounder, once highly sought by southern New England fishermen. The National Oceanic and Atmospheric Administration has described the fish as "significantly below target population levels" on Georges Bank, a key fishing ground. Scientists with University of Rhode Island and Rhode Island Department of Environmental Management wrote that the fish have struggled to reach maturity "due to increased predation related to warming winters" in a report last year.

On the West Coast, Chinook salmon face an extinction risk due to climate change, NOAA has reported. Drought has worsened the fish's prospects in California, at the southern end of its range, scientists have said.

Fishermen on the East Coast, from Virginia to Maine, have dug softshell clams from tidal mud for centuries, and they're a staple of seafood restaurants. They're used for chowder and fried clam dishes and are sometimes called "steamers."

The 2020 haul in Maine, which harvests the most clams, was the smallest in more than 90 years. And the 2021 catch still lagged behind typical hauls from the 2000s, which were consistently close to 2 million pounds (907,000 kilograms) or more.

Predicting what the clam harvest will look like in 2022 is difficult, but the industry remains threatened by the growing presence of invasive green crabs, said Brian Beal a professor of marine ecology at the University of Maine at Machias. The crabs, which eat clams, are native to Europe and arrived in the U.S. about 200 years ago and have grown in population as waters have warmed.

"There seem to have been, relative to 2020, a ton more green crabs that settled," Beal said. "That's not a good omen."

One challenge of managing fisheries that are declining due to warming waters is that regulators rely on historical data to set quotas and other regulations, said Lisa Kerr, a senior research scientist with the Gulf of Maine Research Institute in Portland, Maine. Scientists and regulators are learning that some fish stocks just aren't capable of returning to the productivity level of 40 years ago, she said.

Back then, U.S. fishermen typically caught more than 100 million pounds (45.4 million kilograms) of Atlantic cod per year. Now, they usually catch less than 2 million pounds (907,000 kilograms), as overfishing and environmental changes have prevented the population from returning to historical levels.

The future of managing species that are in such bad shape might require accepting the possibility that fully rebuilding them is impossible, Kerr said.

"It's really a resetting of the expectations," she said. "We're starting to see targets that are more in line, but under a lower overall target."