Medical Examiner: Slain UVA students were shot in the head 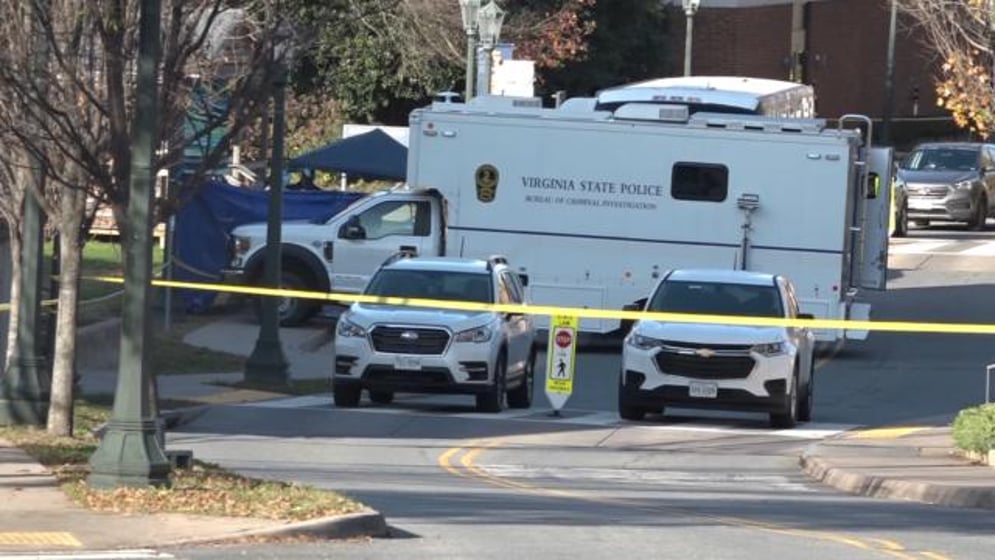 RICHMOND, Va. (AP) -- Three University of Virginia football players who were shot on a bus as they returned from a field trip each died of a gunshot wound to the head, according to the Office of the Chief Medical Examiner.

The cause of death for Lavel Davis Jr., D'Sean Perry and Devin Chandler was released in response to a request from The Associated Press on Thursday. LaKeshia Johnson, Central District Administrator of the medical examiner's office, also said in an email that the manner of death was homicide.

The students were shot late Sunday night as they returned to campus after traveling to Washington, where they saw a play and had dinner together. Authorities have said that Christopher Darnell Jones Jr., a UVA student and former member of the football team who was on the field trip, began shooting students on the charter bus as it pulled to a stop at a campus parking garage.

Jones, 23, faces second-degree murder and other charges stemming from the shooting, which set off a manhunt and 12-hour campus lockdown before Jones was apprehended in suburban Richmond. Jones is being held without bond.

A witness told police the gunman targeted specific victims, shooting one as he slept, a prosecutor said Wednesday at Jones' first court appearance. Two other students were wounded. Neither Jones nor his attorney addressed the charges in court.

Officials said Thursday that an outside special counsel will assist the state attorney general in reviewing the shooting.

In a letter, University of Virginia President Jim Ryan and University Rector Whitt Clement asked Attorney General Jason Miyares to appoint outside counsel to investigate both UVA's response to the shooting, as well as the efforts it undertook prior to the violence to assess the potential threat of the suspect.

"After a tragedy of this nature, it is important for the affected institution to take a hard look at what circumstances led up to the event and, how the University responded in the moment," Clement said in a statement. "Once an external review commences, we expect it to be the central avenue by which we gain a deeper understanding about what led to this tragic event."

An ongoing criminal investigation is also underway, led by Virginia State Police. The agency, which assumed primary responsibility in the case Thursday, said it could not comment on a possible motive for the shooting.

Miyares granted the university's request for the outside review, saying in a news release that he would enlist special counsel to assist his office.

"A public report will be shared with students, families, the larger UVA community, and government officials at the appropriate time," Miyares spokesperson Victoria LaCivita said in a statement. "The Attorney General will work with deliberate speed while ensuring that all necessary resources remain devoted to the criminal investigation being conducted by state and local authorities."

In its request, UVA asked that the probe also "review all relevant University policies and procedures and make recommendations if opportunities for improvement or needs for change are identified."

UVA has said that Jones had been on the radar of the school's threat-assessment team since the fall. The university has also provided sometimes conflicting or erroneous statements about that team's work over the course of the week.

Davis, Perry and Chandler will be honored Saturday in a memorial service on campus. A female student who was injured has since been discharged from a hospital. Football player Mike Hollins, who was also injured, underwent surgery and is still recovering in the hospital.

Hollins was "progressing positively" on Thursday and will hopefully begin to take some steps, according to Joe Gipson, a family spokesperson.

In an interview with ESPN Thursday, Mike Hollins' mother said her son at first thought he heard balloons popping on the bus before he saw Jones. Hollins then yelled for the bus driver to stop and ran off the bus with two other students.

Hollins quickly realized that no other students had fled the bus and ran back to help, Brenda Hollins said. Her son encountered Jones pointing a gun at him on the bus's first step, prompting Hollins to turn to run.

"All he remembers is he tried to turn, but he saw him lift the gun," Brenda Hollins said. "And he felt his back get hot … And he pulled his shirt up as he ran, and he saw the bullet protruding from his stomach."

After assuming the lead in the criminal investigation from campus police, Virginia State Police on Thursday provided the most detailed accounting to date of how authorities say the shooting unfolded.

In a news release, the agency said Jones had traveled with other UVA students and a professor to the nation's capital for a theater performance at the Atlas Performing Arts Center. The group ate dinner in Washington before a professor and 22 students returned to Charlottesville, state police said.

As the bus pulled up to the campus parking garage and students were getting up to leave, Jones "produced a weapon and began firing," the news release said. As he exited the bus, he fired additional rounds, fled on foot and eventually left the area in a Dodge Durango, according to state police.

"Investigators are still actively piecing together Jones' movements between the time he fled the shooting scene and was apprehended in Henrico County. At this stage of the investigation, state police is not in a position to comment on Jones' motives behind the shootings," the news release said.

A handgun was recovered in "relative proximity" to the bus and no firearms were recovered inside, state police said. A search warrant executed on Jones' residence in Charlottesville resulted in the recovery of a rifle and a handgun, according to the news release.

The university said earlier this week that Jones drew the attention of the university's threat-assessment team this fall in the context of a "potential hazing issue." UVA has declined to elaborate on the nature of the possible hazing incident, though athletics director Carla Williams said she wasn't aware of any connection with the football program.

During its threat-assessment review, university officials began investigating a report that Jones had a gun and ended up discovering Jones had previously been tried and convicted of a misdemeanor concealed weapons violation in 2021, which he had failed to report, according to a statement.

The school initially said it "escalated his case for disciplinary action" on Oct. 27. But a spokesman, Brian Coy, revised the timeline Tuesday night. He said that likely due to either a human or technical error, the report had not actually been transmitted to the University Judiciary Committee, a student-run body, until Tuesday night after the shooting.