Colorado club shooting survivor: 'I want to be resilient' 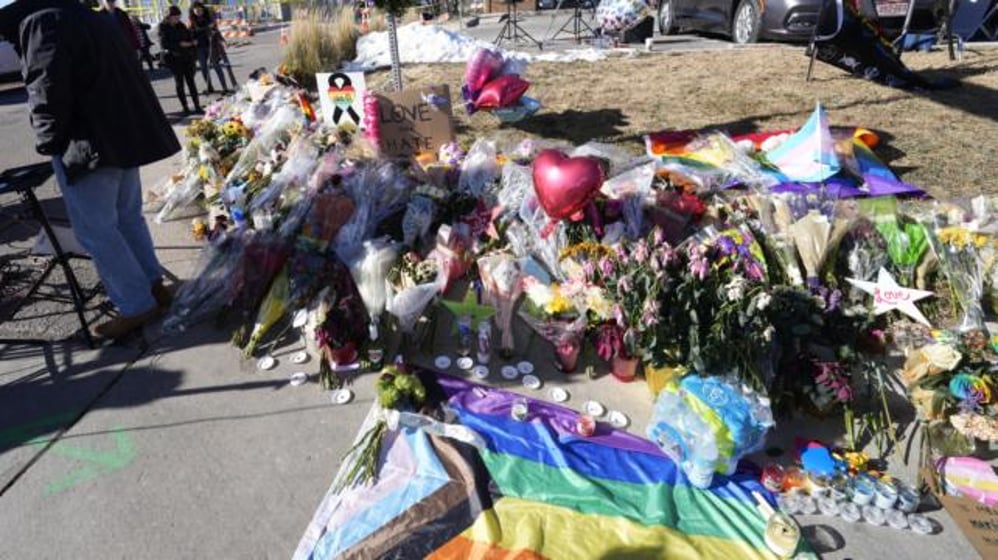 Bouquets of flowers sit on a corner near the site of a mass shooting at a gay bar, Nov. 21, 2022, in Colorado Springs, Colo. (AP Photo/David Zalubowski)

One man who has frequented Club Q for decades was just opening up a tab at the bar when he was shot in the back.

Another man was about to leave the club with his group when he heard a "pop, pop, pop" and took a bullet to his arm — then watched his boyfriend and sister fall to the floor.

They are some of the 17 people wounded by gunfire Saturday when a 22-year-old man went on a shooting rampage at Club Q, a well-known club for the LGBTQ community in Colorado Springs. On Tuesday, they shared the horror of seeing their loved ones shot down in front of them, as well as the hope they felt as people helped each other in the chaos.

Ed Sanders, 63, said he had been waiting in line at the bar, had made his way up to the front and given the bartender his credit card when he was hit in the back — right between the shoulder blades. Surprised, he turned to look at the gunman, only to be hit again in the thigh as another volley of shots were fired.

"I fell. And everybody fell," Sanders said in video statements released Tuesday by UCHealth Memorial Hospital Center. "It was very traumatic. I shielded another woman with my coat … there was a lot of chaos."

James Slaugh said he, his boyfriend and his sister were getting ready to leave the club when, "all of a sudden we just hear, 'pop, pop, pop.' As I turn, I took a bullet in my arm from the back."

Slaugh, who spoke to The Associated Press from his hospital bed, said he watched others around him fall — including his boyfriend, who was shot in the leg, and his sister, who had bullet wounds in 13 places. He quickly called the police, heard several more shots, then nothing. The scariest part of the shooting, he said, was not knowing whether the gunman would fire again.

Five people were killed in the shooting, which stopped after the gunman was disarmed by patrons.

The motive for the attack is still being investigated and the man has not been formally charged. Police say he was armed with multiple firearms, including an AR-15-style semiautomatic rifle, and possible hate crimes are being considered.

"I want to be resilient. I'm a survivor," Sanders said. "I'm not going to be taken out by some sick person."

Sanders has been a patron of Club Q for 20 years and even went to the club's opening night decades ago. He wore a hospital gown and had an oxygen tube in his nose in the video recorded by the hospital.

He said that after the 2016 Pulse gay nightclub shooting in Florida, which killed 49 people, Sanders thought about what he would do if something similar happened at Club Q — but he never dreamed it would become reality.

"I'm smiling now because I am happy to be alive," Sanders said. "I dodged a major event in my life and came through it, and that's part of who I am as a survivor."

Sanders knew many of the victims, including the "door lady" and two bartenders who died. Sanders said that after the shooting, people who weren't hit were helping each other "just like a family would do."

Sanders said the shot to his back missed vital organs but broke a rib. He said he now has a concave wound in his back and will need skin grafts. Sanders was also shot in the thigh, and said "that was the most blood."

"I think this incident underlines the fact that LGBT people need to be loved," Sanders said.

For Slaugh, Club Q was a place where he felt safe after coming out as gay at age 24. It was where he met his partner, Jancarlos Del Valle, eight months ago, and it was where they took his sister, Charlene, on Saturday night to cheer her up from a recent breakup, as well as the death of their mother from COVID-19 a year ago.

Slaugh said that after the gunman was subdued, the club instantly became a community again. Patrons grabbed paper towels to try to stop bleeding wounds. One man told Slaugh he would be OK and kissed him on the forehead.
"That was such a reassurance to me," he said. "That hope stayed there."

Del Valle and James were rushed to one hospital and Charlene, who had more extensive injuries, was taken to another.

James said he did not find out what happened to his sister until the next day. A community of support has formed around the Slaughs, including a GoFundMe campaign to pay for medical bills. Messages have poured in from around the world.