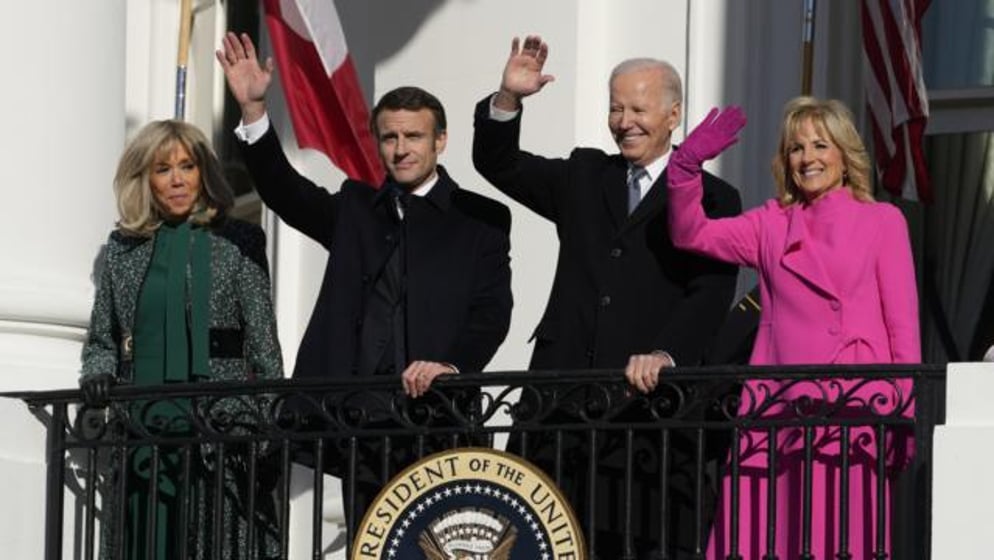 WASHINGTON (AP) -- Presidents Joe Biden and Emmanuel Macron vowed to maintain a united front against Russia on Thursday amid growing worries about waning support for Ukraine's war effort in the U.S. and Europe. Biden also signaled he might be willing to tweak aspects of his signature climate legislation that have raised concerns with France and other European allies.

Biden was honoring Macron with a grand state dinner Thursday evening — the first of the U.S. president's COVID-19-shadowed presidency for a foreign leader. But following up on Biden's upbeat comments might not go as smoothly as that fancy affair. Republicans who are about to take control of the House have shown less willingness than Biden to spend billions on Ukraine, and Democratic lawmakers said Thursday they were not about to jump back into the climate legislation.

In fact, for all the positive statements, Macron's visit to Washington has been tempered by his criticism of Biden's Inflation Reduction Act and the challenges both leaders face amid the mounting costs of keeping military and economic aid flowing to Kyiv with no end in sight for the Russian invasion.

Despite the differences, Biden and Macron sought to underscore that the U.S.-France alliance remains solid and that the West must hold steadfast against Russian President Vladimir Putin's war in Ukraine.

"Today, we reaffirm that, as I said, we're going to stand together against this brutality," Biden said. "Putin thinks that he can crush the will of all those who oppose his imperial ambitions by attacking civilian infrastructure in Ukraine, choking off energy to Europe to drive up prices, exacerbating the food crisis. That's hurting very vulnerable people not just in Ukraine but around the world and he's not going to succeed."

Both leaders at an outdoor welcoming ceremony paid tribute to their countries' long alliance. But they acknowledged difficult moments lay ahead as Western unity shows some wear nine months into the war in Ukraine.

In Washington, Republicans are set to take control of the House, where GOP leader Kevin McCarthy has said his party's lawmakers will not write a "blank check" for Ukraine. Across the Atlantic, Macron's efforts to keep Europe united will be tested by the mounting costs of supporting Ukraine in the war and as Europe battles rising energy prices that threaten to derail the post-pandemic economic recovery.

Macron stressed that the issue has ramifications far beyond Ukraine's borders.

"What is at stake in Ukraine is not just very far from here, in a small country somewhere in Europe," he declared. "But it's about our values. And about our principles."

"Our two nations are sisters in the fight for freedom," he said.

Biden indicated he would be willing to talk with Putin if the Russian leader demonstrated that he seriously wanted to end the invasion. But the U.S. president, as always, conditioned such talks on support by NATO allies.

"I'm prepared to speak with Mr. Putin if in fact there is an interest in him deciding that he's looking for a way to end the war," Biden said. "He hasn't done that yet."

In addition to their talk of Ukraine — what White House officials said was at the top of the agenda — the two leaders discussed Macron's and other leaders' concerns about the recently enacted clean energy law.

Macron has made clear that he and other European leaders are opposed to incentives in the Inflation Reduction Act that favor American-made climate technology, including electric vehicles.

Biden acknowledged "glitches" in the legislation but said "there's tweaks we can make" to satisfy allies.

However, Macron said that while the Biden administration's efforts to curb climate change should be applauded, the subsidies would be an enormous setback for European companies.

"We want to succeed together, not one against the other," Macron added. He said the U.S. and France would "resynchronize" their clean energy efforts to ensure there's no "domino effect" that undermines clean energy projects in Europe.

On Capitol Hill, despite Biden's talk of possible changes in the law, Senate Finance Committee Chairman Ron Wyden, one of the bill's main architects, said, "Congress passed a law to rev up the American electric automobile industry, create good-paying American jobs and tackle climate change at the same time. I have no intention of reopening it."

The European Union has also expressed concern that tax credits in the law would discriminate against European producers and break World Trade Organization rules.

The leaders, with aides, met for about three hours after taking part in a formal ceremony with hundreds of people gathered on the South Lawn on a sunny, chilly morning. There was a 21-gun salute and review of troops, and ushers distributed small French and American flags to the guests.

Both Biden and Macron in their public comments sought to keep the focus on the situation in Ukraine.

The state visit should provide a boost to Macron diplomatically that he can leverage back in Europe. His outspoken comments help him demonstrate that he's defending French workers, even as he maintains a close relationship with Biden. The moment also helps Macron burnish his image as the European Union's most visible and vocal leader, at a time when Europe is increasingly concerned that its economy will be indelibly weakened by the Ukraine war and resulting energy and inflation crises.

To that end, Biden praised Macron as "not just the leader of France" and for being "very outspoken and very very commanding in Europe." In his public comments, Macron repeatedly referred to the U.S. president as "dear Joe."

Still, at moments, Macron's rhetoric has rankled U.S. and Ukrainian officials, with calls for Ukraine and Russia to meet at the negotiating table. White House officials have publicly maintained that it is solely up to Ukraine's leadership to decide when it's appropriate to engage the Russians and have stressed the war could end immediately if Putin ended his invasion.

Macron also raised eyebrows earlier this month in a speech at a summit in Bangkok when he referred to the U.S. and China as "two big elephants" that are on the cusp of creating "a big problem for the rest of the jungle." His visit to Washington came as both the U.S. and France are keeping their eyes on China after protests have broken out in several mainland cities and Hong Kong over Beijing's "zero COVID" strategy.

The state visit marked a return of a White House tradition of honoring close foreign allies that dates back to Ulysses S. Grant's presidency.

Macron and his wife, Brigitte, came to the U.S. bearing gifts carefully tailored to their American hosts, including a vinyl record and CD of the original soundtrack from the 1966 film "Un Homme et une Femme," which the Bidens went to see on their first date, according to the palace.

Among the gifts Biden and first lady Jill Biden presented the Macrons was a mirror framed by fallen wood from the White House grounds and made by an American furniture maker.

Vice President Kamala Harris hosted Macron for a lunch at the State Department before the evening state dinner in an enormous tented pavilion constructed on the White House South Lawn.