Jan. 6 panel drops Trump subpoena as it wraps up work 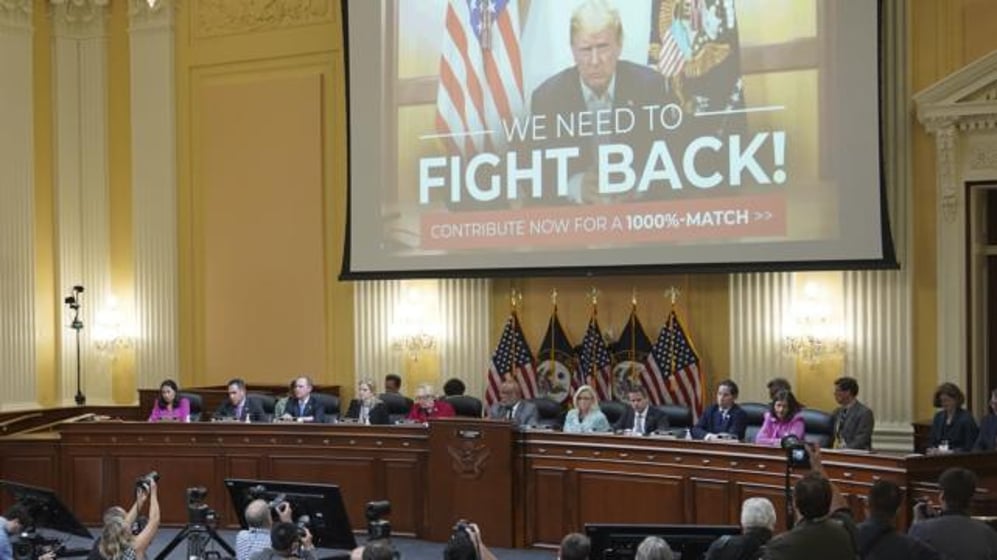 A video of former President Donald Trump speaking is displayed as the House select committee investigating the Jan. 6, 2021 attack on the U.S. Capitol, on June 13, 2022. (Mandel Ngan/Pool via AP)

WASHINGTON (AP) -- The House Jan. 6 committee has dropped its subpoena against former President Donald Trump as it wraps up work and prepares to dissolve next week.

Mississippi Rep. Bennie Thompson, the committee's Democratic chairman, wrote in a letter to Trump lawyer David Warrington on Wednesday that he is formally withdrawing the subpoena.

The committee had voted to subpoena Trump during its final televised hearing before the midterm elections in October, demanding testimony and documents from the former president as it has investigated his role in the Jan. 6, 2021 Capitol insurrection and efforts to overturn his 2020 defeat.

Lawmakers on the panel have acknowledged the subpoena would be difficult to enforce, especially as Republicans are poised to take over the House in January. But the move had political and symbolic value.

"We are obligated to seek answers directly from the man who set this all in motion," Wyoming Rep. Liz Cheney, the panel's vice chairwoman and one of two Republicans on the nine-member committee, said at the time. "And every American is entitled to those answers."

Trump then sued the panel in November to avoid cooperating. The lawsuit contended that while former presidents have voluntarily agreed to provide testimony or documents in response to congressional subpoenas in the past, "no president or former president has ever been compelled to do so."

The committee's request for documents was sweeping, including personal communications between Trump and members of Congress as well as extremist groups. Trump's attorneys said it was overly broad and framed it as an infringement of his First Amendment rights.

While the panel never gained Trump's testimony, the committee interviewed more than 1,000 witnesses, including most of his closest White House aides and allies. Many of those witnesses provided substantive detail about his efforts to sway state legislators, federal officials and lawmakers to help him overturn his defeat. And White House aides who were with him on Jan. 6 told the panel about his resistance to tell the violent mob of his supporters to leave the Capitol after they had broken in and interrupted the certification of President Joe Biden's victory.

In its final report issued last week, the committee concluded that Trump engaged in a "multi-part conspiracy" to upend the 2020 election and failed to act on the violence. The panel also recommended that the Justice Department investigate the former president for four separate crimes, including aiding an insurrection.

On social media Wednesday evening, Trump and his lawyers construed the move as a victory.

"They probably did so because they knew I did nothing wrong, or they were about to lose in Court," Trump wrote on his social media site. He called the panel "political Thugs."